In our back yard. A birthday party for our two year old, Sunday 20 February. 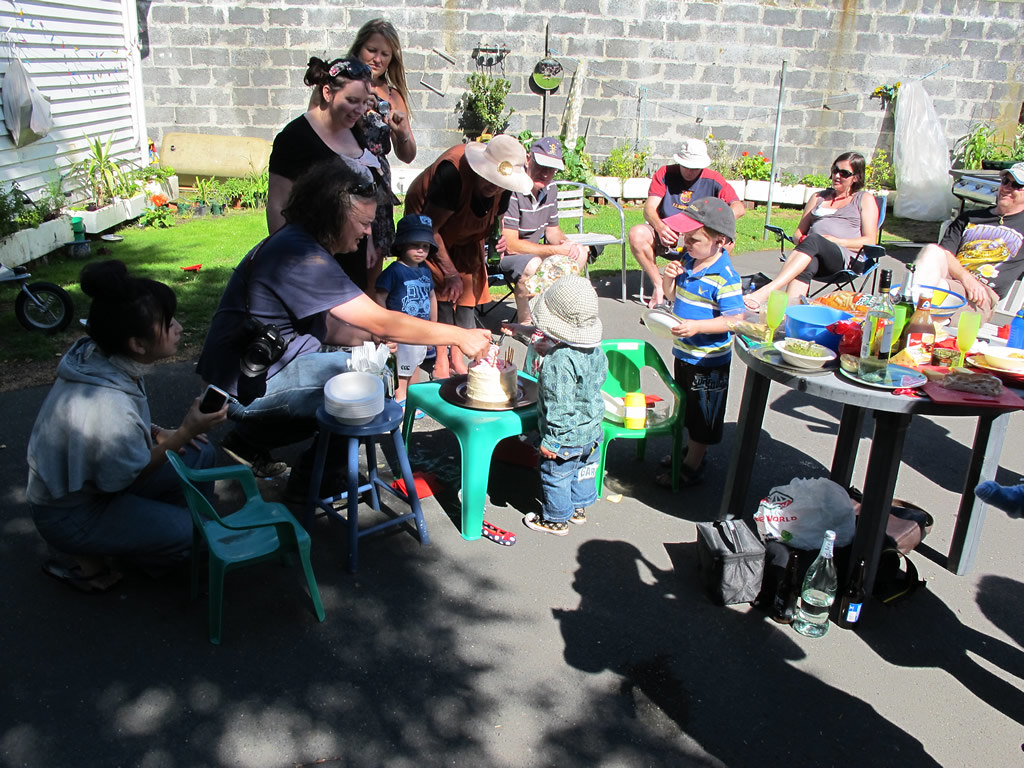 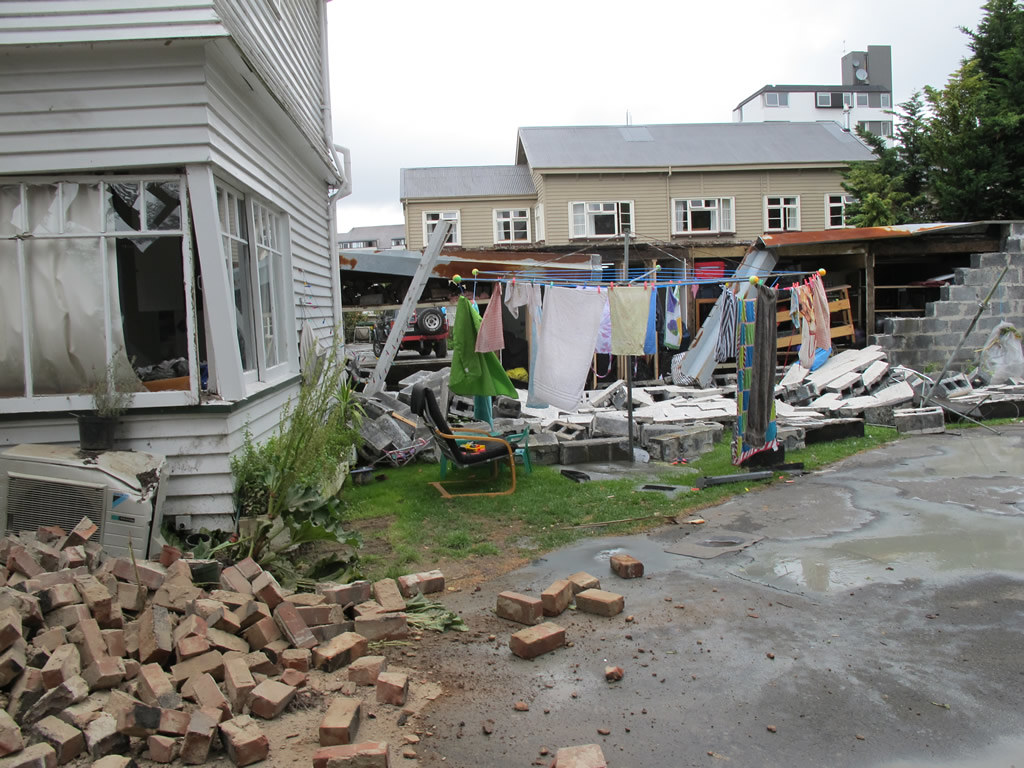 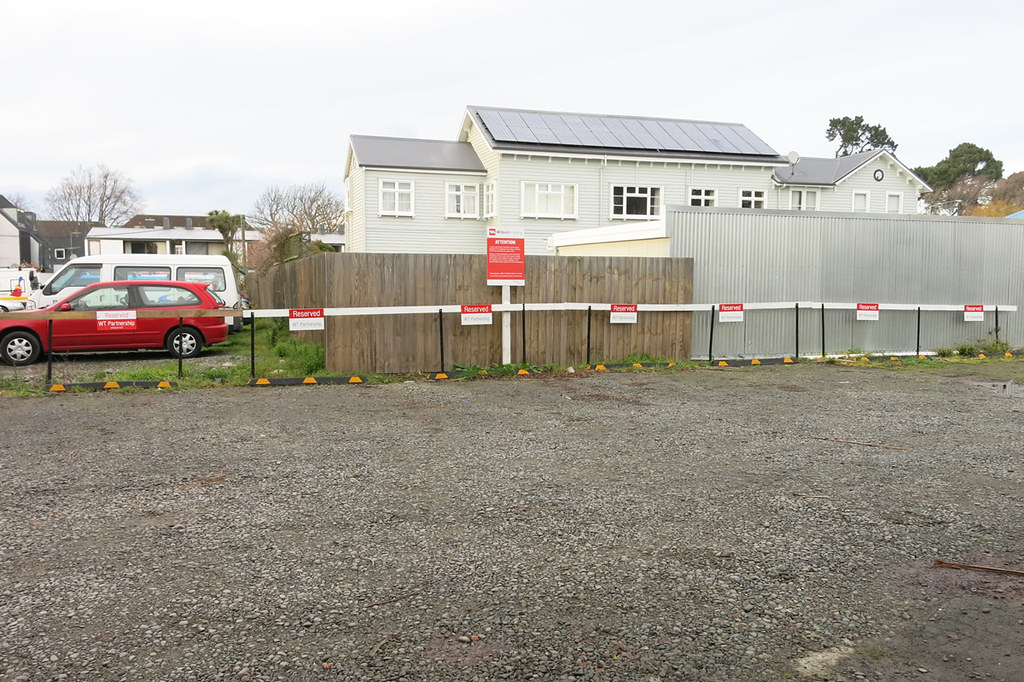 Aftershocks in Christchurch on Monday 13 June 2011 were a ripping of the wound. Yes, there had been plenty of aftershocks but this was bigger, and it also broke a kind of detente. Until then, we had the tacit understanding that while an aftershock was a bastard, there wouldn’t be one of a similar size straight away. We were wrong, and June saw the first of our doublet earthquakes.

I was working at home, and had been to Merivale and grabbed a vege pie and coffee from the Edgeware BP. Was literally in the doorway of the house when the quake hit. So held on to the doorway. I visited a neighbour, and met another in the driveway looking at liquefaction. I was starting to reset up my laptop when number two hit. It was worse, and stuff fell down all over the house. Much more liquefaction bubbled up. My family was away in Redwood. Was visited a friend down the road after #1; I visited him after #2 by which time we were both feeling pretty damn dark.

We had a bumpy night all in the bed, and woke up to hear the landlord out digging the liquefaction. I went to help, all dressed in black and petticoat. That was hard yakka but took me out of myself, was feeling down to it.

The next day, we packed up the car to get out of town for a bit. Stayed the night at Cheviot, had fish and chips and world-famous potato cakes. In the morning we stopped up the hill at St John’s Church. It had beautiful William Morris designed stained glass. It looked all locked up but we found a side door and went in for a look. The play of dark and colour was breathtaking. I felt shellshocked and the beauty was ecstatic.

We drove up to Picton with many stops on the way. While there we ate and slept well, went for walks, shopped at St Vinnies. We visited my rellies at the Picton Cemetery. I had a laptop with me, and worked either at the library or at home. We rode the miniature trains, played at parks, went on walks, and made friends with Downunder Books. “What’s that?” “A book” went numerous kid conversations.

I had the day off and went to The Palms to do a spot of Christmas shopping. Had bought a little pair of boots at Pumpkin Patch for Bubbles, and was trying on a dress in City Chic. Shake, shake, lights out. I scrambled to get dressed and out. The staff were incredibly kind and calm, directed us to the exit. Everyone behaved well, and in an orderly way we left the building, outside into the sun. The streets were busy with people, many couldn’t get their cars – including a friend who I discovered later was also in The Palms. I walked home, chatting to people on the way, trying to text family. One woman and her daughter walking with me had been at the movies for the quake.

I got home and our new neighbours’ daughter was at our place. They were shifting in and everything in their old place had fallen over as the cupboards were open for moving. We got to know each other, and were in their empty house for the next shake. The wee girl was playing inside, and we scooped her in our arms to hold on to door frame.

It turns out being in an empty house is one of the less unpleasant places to be for a shake – nothing falling over or down.

And it is a great way to become quickly acquainted with new neighbours.

It was three years ago today. My daughter is now four and looking back makes me remember how small and vulnerable she was.

I was the last to arrive in the doorway for shelter, I don’t remember being covered in books.

Our chimney came down, like most Christchurch chimneys did.

The sun wasn’t up yet, and we took turns nipping round the corner to see the shops fallen into Victoria Street.

In the morning, the petrol stations went mad.

The neighbour’s chimney was all Jenga-ed.

The clean up began, as chimneys were loaded up and building fixed and secured.

In the days that followed, our neighbourhood was a busy place for the wrecking ball.

Robertson’s Bakery demolition was astonishing, especially when they gracefully picked out the chandelier.

Saggio di vino was a No Go.

After 4 September, Durham Street Methodist Church was fenced off.

It collapsed in the 22 February 2011 earthquake. Sadly Neil Stocker, Paul Dunlop and Scott Lucy were inside; they were recovering a pipe organ from the church.

I lived in the central city close to Victoria Street. When the quake struck, my partner went to rescue our baby . He stood with her in the doorway, and I ended up there too but have no recollection of how I got there. The bookshelves had fallen across the bed but missed me since I’m so short.

A few objects fell down in the house, but the kitchen was almost untouched, except for a container of oil which left a big oil slick on the floor.

After the initial drama of getting out of the house we made contact with their neighbours in the other three flats. When we had calmed a bit, we began to venture around the neighbourhood. Around the corner, the Daily Bagel building had collapsed on to the street.

We never lost power and were without water for only a short time. The flat became a gathering point for friends who came to charge phones and use the internet. The day turned into a strange social event with people sitting outside drinking beer, and stiff whiskies from our neighbour Kevin.

I have no recollection of how the quake sounded, even thought the chimney had come down outside our bedroom. Rosary House next door had a very large water tank and for a while afterwards all I could hear was a really loud, strange, slosh, slosh, slosh.

That day and the next day, we gathered extra batteries and torches, secured bookshelves and tidied up the house. Having our wee girl was a distraction – normal things like feeding her needed to go on. Even though you are fearful for your child, they are a way of not thinking about the bad things. She loved the distraction and interest of lots of people around.

I was quick to get in touch with Mum, who was on her own at home. Dad was in Dunedin and immediately hitched a ride back on a truck – probably the only person trying to get to Christchurch!

In the days that followed, we grappled with what to do next. I felt so unsafe, that I was afraid that if we went, it would be hard to come back. So we stayed, and worked through it.

There are times  the days and months between 4 September 2010 and 22 February 2011 become a blur, and it isn’t clear what happened when. But September I remember as the time we were shaken awake and the world burst into something new. Into #eqnz, EQC, yes – and aftershocks so constant I was throwing up in a combination of seasickness and fear. And a kind of ballsiness and camaraderie that made Christchurch like London during the blitz.

This could be like the Blitz but I can’t be arsed putting on red lipstick or singing Lili Marlene. It’s jammie pants and pasty face #eqnz

Gettin’ ready for Cup Week. Hot Damn Lingerie in the Re:START did it best.

A visit to QEII at New Brighton proved disturbing but also kind of amazing. There were layers of ads making a beautiful paper sculpture.

And a charming chap teaching wee girl to do ball tricks, as well as this awesome impromptu handstand.

A steampunk Christmas tree went up in the Re:START Mall.

Farmers carpark, on the wire.

A weekend demo for URS House.

A beautiful sunset on the way home from Hanmer Springs.

Another neat piece of art – Re-MED-y by Justin Kerr

Last looks at the Clarendon are kind of idyllic.

A bird on a wire.

The awesome Wongi and Ikarus, as Pinocchio goes up on the side of the Lichfield St carpark.

I don’t remember Real Groovy moving here – I used to visit the one by SOL Square a bit, but it obviously moved after the September 2010 earthquake. But in October 2012 its new former bikeshop location on Manchester/Tuam Street was being demolished.

Wongi’s mural on Tradestaff building on the corner of Colombo and St Asaph Street was taking shape. Part of enjoying the new art around town is the pleasure of watching it grow.

The back of the Odeon theatre, as viewed from St Asaph Street.

The demolition of the beautiful Cranmer Courts was underway, with protest accompaniment.

Adios Coyotes. Another demolition on The Strip.

Clash boutique in the Re:START. A cool bit of art by Smeagol. Not sure where it is now as the shop has gone and is now Breads of Europe.

A pleasing piece of decorative circuitry.

We love the beach.

When you work in the CBD of Christchurch, you are never short on things to see. On 10 September, I looked down Tuam Street and saw the roof of the Odeon sailing away.

And it landed on Manchester Street.

The colours of the ECAN building on Kilmore Street, unmasked.

A visit to Woodend.

A vacant space on Colombo Street made kind of beautiful by the setting sun.

Parklife: a radiocontrolled helicopter gets stuck in a tree in St Albans Park.

Demolition on the strip.

Elvis in Shand’s Emporium – one of those iconographic Christchurch sights.

I go for the jewellery pileup.

After the implosion, a trampoline on Kilmore Street.

The BMX track, not just for bikes.

A few of my favourite things, a fabulous hand-done piece by Sarah Laing.

An abandoned house, alive with the morning light.

The fab Wongi Tradestaff mural takes shape on the corner of Colombo and St Asaph Street.

The Railway Station on Moorhouse Avenue.

You take paradise, you put up a parking lot.

Tjalling is innocent. Christchurch Art Gallery work on the back of COCA.

The Clarendon continues its stately decline.

Mannequins in the Re:START face they know not what.

Who can resist a photo of a baby with a book?

Flying over the Clarendon.

Words in the gutter.

One of Christchurch’s cutaway houses.

View from the NG Gallery.

Busted up signage on Lichfield Street.

Ladies on the toilet block at St Albans Park.

Car flying on the skate ramp.

God save the Queen.

The Newstalk ZB Building – before its controlled implosion.

Beautiful rubbish on a demolition site.

I think this was my first spotting of the magic of Mike Hewson’s work on Cranmer Court.

There was snow. And more snow.

Walking to work let me see some beautiful morning city skies. Light, and colour, and silhouettes of buildings in their last days.

Westpac Tower and Holiday Inn, both now gone – but here they are bathed in golden light.

Gloucester Street reopened on the evening of 15 June. I walked past work. The street was almost unbearably sad, and the night was cold and wet.

The Edgeware Super Value with its Kia Kaha sign.

This shop display had me flummoxed.

One of my favourite Christchurch signs. Welder on Welles Street.

The arrival of Michael Parekowhai’s On first looking into Homer … The bulls arrive.

“On Peterborough Street, the houses are wonky …”

I remember these ladies from when they used to frequent Victoria Street.

A toilet left behind.

Ironside House on the move.

A plastic romance on Colombo Street.