When I was little, I thought my ancestry was Scottish, Irish, Maori, Spanish and Swedish. Later on my grandmother told us she had been adopted, and our ancestry on her side was Jewish – an East End London family who moved to New Zealand. So Grandma was in fact a Cohen.

Exploring this side of the family led me to great-great aunt Myra Cohen “Barber, dental assistant, entertainer, milliner”. Here are some excerpts from her entry in The Dictionary of New Zealand Biography, written by Fiona McKergow:

Her parents were central figures in local community organisations. From 1898 to around 1905 Myra attended Reefton School (upgraded to Reefton District High School in 1902). She won a scholarship for two years’ free tuition at Nelson College for Girls; however, being hampered by defective eyesight, she was obliged to forego this opportunity and her desire to become a journalist.

She was widely advertised by her employer as ‘the only lady barber in New Zealand’.

The Cohens’ financial circumstances eased in 1910 when Percival won a nationwide lottery for the famous ‘Honourable Roddy’ nugget (weighing 99 ounces and worth £450), found at the Ross Flats goldfields and named after the minister of mines, Roderick McKenzie. The nugget was purchased from Percival by the government and mounted as a coronation gift to King George V.

Cohen’s ambitions grew, and in 1914 she became a receptionist and nurse attendant for a well-regarded firm of Greymouth dentists. Here she gained further expertise in manufacturing dentures from vulcanite, turning out hundreds with skill and precision. Cohen lived in a guest-house and became actively involved in the social life of the town.

During the First World War she participated with enthusiasm in patriotic fund-raising activities organised by Tom Pollard. As a member of Pollard’s Pierrot and Pierrette Show, she was a performer in variety shows, comic operas and a highly successful marching team.

Myra Cohen was compelled to resign from her position as dental assistant when she contracted influenza during the epidemic of 1918. It is not known when she left the West Coast. By April 1919 both her parents had died and her sister Kate had taken charge of the family business, which now traded mainly in books.

In October 1928 she entertained Charles Kingsford Smith in her workroom, and later watched him depart from nearby Woodbourne aerodrome on his return flight across the Tasman, an event she considered the ‘most thrilling incident’ of her life. She remained in Blenheim until at least 1934. 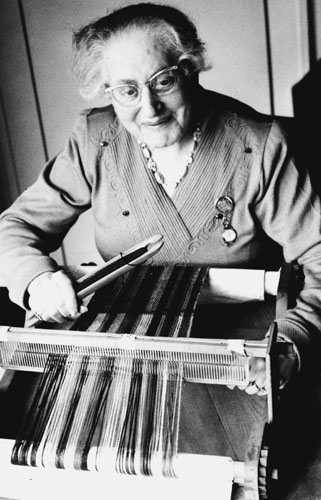 Miss Myra Cohen with a hand loom at the Blind Institute. Reference Number: EP/1959/1432-F Display Dates: 28 Apr 1959
Permission of the Alexander Turnbull Library, Wellington, New Zealand, must be obtained before any re-use of this image.

Myra compiled her reminiscences of life on the West Coast in the 1950s. They are entitled Westland Metal and are held at the Alexander Turnbull Library.

Without these, little trace of her varied career would remain.

6 thoughts on “My great-great aunt Myra”